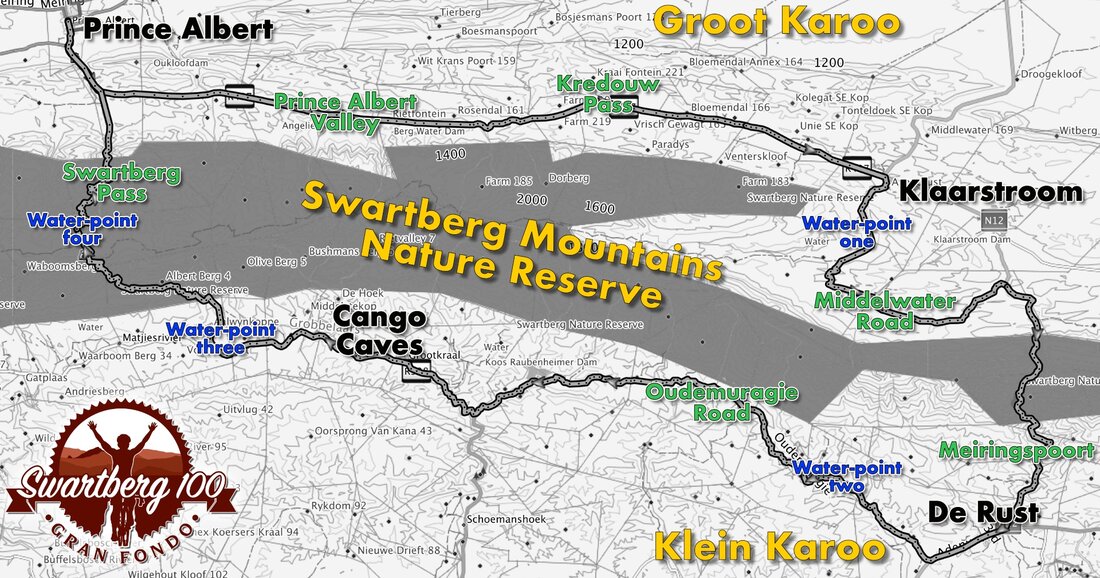 The Swartberg100 Gran Fondo starts and ends in Prince Albert, arguably one of the most attractive Karoo towns in South Africa, it covers 171 km of which there are 3 gravel sectors covering 79 km. The final climb is over the gravel Swartberg Pass, a relentless climb of 28 km, the last 9.8 km being on gravel with gradients of 16% in places.

The Swartberg100, in true South African tradition, is one of the toughest Gran Fondo's in the world. We have created a course that goes back to the days of old when mountain passes were all gravel and brave cyclists climbed them on single speed bikes weighing in at 16 kg. A course that allows us to pit our modern training knowledge and technology against an old foe, a road surface that isn't always friendly.
Enter Now !

The Medio Fondo and e-Fondo (Not UCI qualifier event)

The route is a Great Karoo experience, first heading out to the east of Prince Albert over some farm lands a combination of gravel road and remote farm track.
It then re-enters the town for a little exploration and then heads out west on a gentle downward sloping, remote gravel road with spectacular views of the Swartberg mountain range and the Groot Karoo basin. At 29km there is a waterstop before turning left onto the Vrisgewaagd farm. Here you will see large scale farming in almost desert-like conditions, and you will be amazed at what a little water and hard work can do in an otherwise barren landscape.

The farm route takes you back into the Swartberg foothills and  connects with the Weltevrede road which meanders back into town through some stunning scenery. There is another water-stop at the 43 km mark before finishing 11.5km further on.
Enter Now !

The Staffetta (Not UCI qualifier event)

Staffetta is Italian for "relay race", we thought we would keep to the Italian theme, after all it was the Italians who came up with the idea of a Gran Fondo, a fun race, a great challenge for all riders, professional to amateur to enjoy together, back in 1970 in the small town of Cesenatico, home of Marco Pantani. 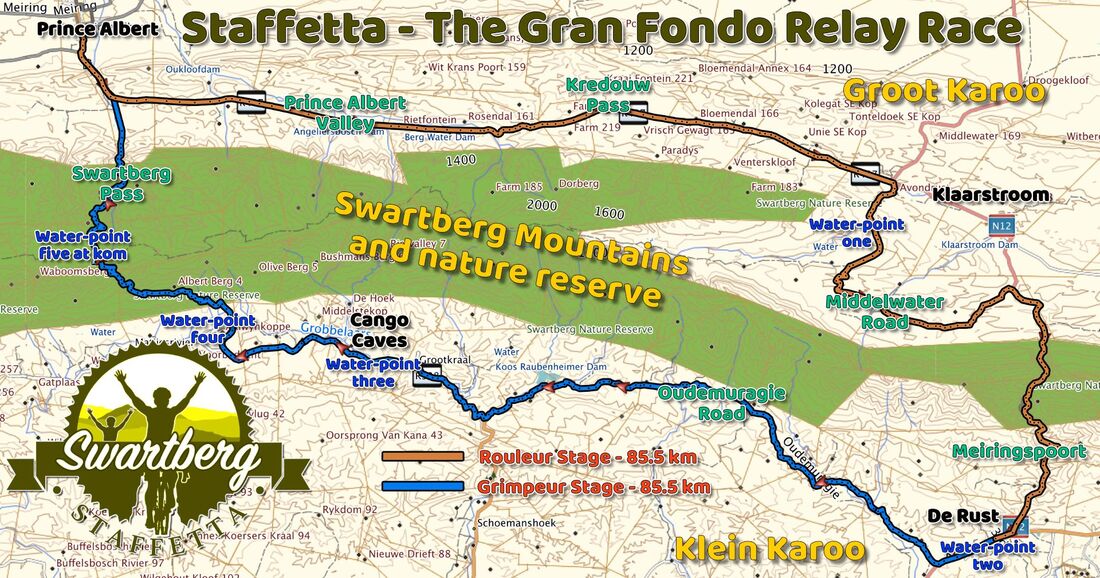 The Staffetta follows the route of the Gran Fondo and is divided into the Rouleur and the Grimpeur Stages.
A rouleur, in cycling, is a rider who goes well on the flat and rolling terrain.
A grimpeur in cycling is a climbing specialist.

The rouleur rider starts in Prince Albert and "hands over the baton" as it were to the grimpeur rider in De Rust, who goes on to complete the race over Swartberg Pass to Prince Albert.

The pretty town of De Rust lies exactly halfway along the route at 85.5km.

Logistics are simple the 2nd rider drives to De Rust and hands over the car keys at the switch-over point for the first rider to drive back to the start/finish in Prince Albert.